Ski Race Uncategorized
January 12, 2014 btmski 0 Comments
It’s that time of year again folks.  Time for Ben’s ski season race reports.  Apologies in advance, this first one is heavy on the word things and light on the picture things.
Season Intro
After an epic summer and early fall I think I have been letting my fitness slip a little bit.  A number of factors have been contributing to this including work and the weather.  I’m no wimp and will get out and ski when it is below zero.  Unfortunately it seems that the coldest snaps and illness happen to coincide with my long training days and as much as I’d like to say I can go ski for 3+ hours when it is minus 10 or sick, I just can’t do it.
Despite mild concern for my fitness, I was pretty excited to get my 2014 race season started last weekend with the two day Twin Cities Championships.  I have been classic skiing way more than I have in previous years and I was excited to see if I couldn’t hang a little closer to the competitive field after the first race.  Unfortunately Thursday before the race I woke up with a horrible sore throat.  I was in no shape to race that weekend.  The race would have been interesting too as they pulled the Sunday race up to Saturday and had a one day pursuit.  Would I have been fit enough to race two 10k races 4 hours apart?  I guess we’ll never know.
So, looking forward I didn’t have another registered race until the Marine O’Brien race at the end of January.  Nope, gotta race before then.  Looking at this weekend’s race calendar, the Loppet Foundations Pre-Loppet which I could still get into for only $22 looked like just the ticket.  A competitive field on the first 17km of the City of Lakes Loppet course sounded brutiful.
Course History
This course and I have an up and down relationship.  I raced the 2010 City of Lakes Loppet the first year I was getting back into skiing after more than a decade of absence.  I had skied most of the course except for that first 9km or so which is the par 3 and back 9 and is anything but easy.  I blew up big time.  I managed to do it better at the TC Champs the next year.  Then COLL in 2011 I blew up again.  The 2013 TC Champs was acceptable I think.
Pre-Race
The last few days leading up to the race I was finally starting to feel better after the week before’s illness.  That is until Friday morning when I had a major allergic reaction to the antibiotic I had been on for the last week.  Talk about a little freak out when you go from perfectly fine one hour to completely covered in hives the next.  Thankfully the doc said I was fine to race as it hadn’t affected my respiratory functions at all, I just looked funny and itched.
The Plan
So given my state of fitness, past history with the course, my health, and this being the first race of the year I had a conservative plan.  I wanted to start further back, go out easy, ski every hill up to the tubing hill very relaxed focusing on good technique and transitions over the top and then see if I couldn’t push the pace on the front 9 and across Wirth Lake to the finish.
I got my Fischer Carbon Lite holes skis all greased up the night before following the Fast Wax recommendations except substituting some Holmenkol warm something or other for the top coat.  Verdict, fast!  It was fast in general out there, but I was out-gliding most people on the downhills.
The Race
Enough chit chat, lets race.  I was a little tardy getting my drop bag to the truck and therefore a little late to the line.  I planned on lining up a ways back, but possibly not that far.  I was probably 10 rows back and with 15-20 people per row there were a lot of people ahead of me.  The start was pretty clean, I only saw one pile-up.  I was double poling for 500m or so and then barely getting to start skating before we hit an uphill corner that bottle necked pretty bad.  The next few hills also bottle necked almost as bad.  Eventually the traffic changed from stop and go to just heavy.

Thanks to the rear starting position and some amount of reserve in feeling pressure to pass EVERYONE in the first 5km, I managed to execute the pre-race plan that far.  With just two major hills remaining on the back nine I was pretty pleased with how the race was progressing.  It was at this point in the race that it was starting to string out.  If I had to guess, I probably passed 50+ people between about 1km and 5km.  With a little more room I was now able to start picking people up ahead and start reeling them in and the race got interesting. 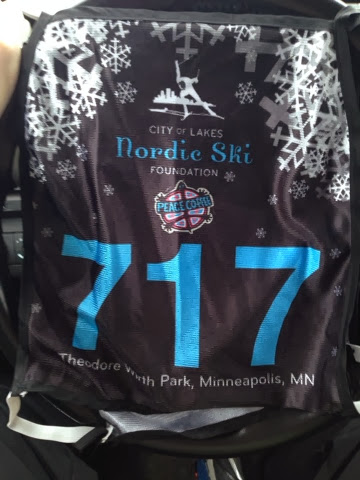 Coming onto the front nine I was skiing behind one guy, there were two more guys maybe 100m up the trail and then a whole crew of about 10 more another 100m up.  I followed the one guy for a while, and then bridged up to the next two.  After a short stint behind them, I bridged up to the next group.  I slowly picked my way through that pack until I was about 3rd position coming under Hwy 55.  Unfortunately the trail after 55 until crossing Wirth Lake the first time is very narrow and twisty and I had to ski someone else’s pace.  I did make it to the front just as we hit the lake.
I made a push across the lake but then bogged down just a bit climbing the last hill.  Two guys got ahead of me.  One opened a little gap and I stuck with the other guy.  Hitting the lake for the last time we had 500m to go.  I went for it trying to catch the guy with the gap.  I almost caught him.  Unfortunately I dragged the guy behind me as well though and ended up getting passed by him as well in the last 50m.  Oh well, sprinting for 75th place.

Analysis and Summary
Immediately after the race I was fairly satisfied with how the race went.  I executed the plan well conserving early and gaining ground.  Later analysis shows that each 5km was faster than the previous 5km.  All day I was reserving final judgement until I could see the results and run them through my nerdy race analysis spreadsheet (yes I have one).

After all of the number crunching I remain pleased with the results.  The results are on par with the results from last year and given the last few weeks I will definitely take that over falling off last season’s finish.

Next up for me will be the 25km Marine O’Brien skate race.  The race bug has bit and I’d like to race next weekend, unfortunately I’ve got plans with the kiddos on Saturday and can’t hit the Balsam Branch race.  That looks like a fun one and I hear there should be a good CyclovaXC contingent on hand.  Hopefully I will see a bunch of you the following weekend down at O’Brien.