It was a decent week leading into the second major race of the season.  Tuesday saw some hard intervals.  I was going to fire it up again on Thursday, but life got in the way.  Friday was a nice relaxing classic ski on the full lit loop at Elm Creek under the lights.

The bigger deal preparing for this race was kick waxing.  Blowing the kick always scares me which is one of the reasons I don’t classic as much as I otherwise would.  With the new snow and cold temps it wasn’t going to be so much about finding what would kick, but possibly more about what would glide too.

I ended up with the full Start wax package for this race.  Start Green and Start MF10, one coat each for glide.  Brushed out and polished up to a nice shine for that cold snow speed.

Next up was the Start Base wax.  My first attempt to cork that in ended up with synthetic cork bits all gummed up in the wax.  That stuff is thick!  I cleaned that all off and put it on thinner and then ironed it a bit and corked it nice and smooth.  Then three very thin applications of Start synthetic green corked smooth.  Finally, the skis and a tin of Start Terva black were cooled off and then two crazy thin coats of Terva were placed on top.  I’m not sure if the Terva application was quite right, but I didn’t have icing issues which was I think the primary purpose so I either did it right, or it didn’t matter.

My skis were crazy fast.  No one was out running me on the downhills.  I had decent enough kick when my technique was spot on.  Unfortunately, my technique wasn’t spot on all that much.  I was a long ways from not having kick, but it wasn’t great either.  I was able to stride most of what everyone else was, but I had to muscle it a bit more.

I drove up to Seeley the morning of the race.  After bib pick-up I pulled into the OO parking lot right about 9am for the 10am race start.  I was one of the last few parking spots in the lot so I lucked out there.

I grabbed my warm-up skis and race skis and headed to the Korte start area south of OO.  Holy cow.  That place is huge and I got a bit lost.  The new trail blazes through what used to be woods and tamed out a bunch of the major topography in that section.  It’s going to be a fabulous starting spot fo the Korte I think, but was definitely disorienting.

I had my warm-up skis in case I wanted to panic wax and wanted something other than my race skis to try something on in an emergency.  Turns out no panic waxing was called for and that let me set my race skis down on the second row of the start while I finished warming up.  Pretty handy.

Standing at the start I was eyeing up who was around that I should try and judge my effort off of.  I was right behind eventual winner Andrew Tillman.  Good, he should be well away in a hurry…  Also on the front row was Kevin Brochman, Olympian and my high school coach.  Sweet, I wanted a chance to race head to head with him again after all these years.  Josh Doebbert was on the front as well and was super fast at SISU last weekend.  Alex Richert was there as well.  He was pretty speedy as a senior in HS last year, but hasn’t been skiing much this year.

In the same vicinity as me we had what I figured were my real benchmarks.  Scott Ellertson was immediately to my right and I’ve been just a place or two behind him at both races this year.  To his right was Jay Wenner, fast guy with usually great skis, but maybe trying to find his fitness this year yet.  To my left, a few tracks over were Per Nelson and Andy Schakel.  Per jumped in an interval with me and TK over Christmas week and Andy is fast, but looked a bit like death warmed over when I passed him at SISU last weekend.

Dennis Kruse gave us the final 3, 2, 1, go count down and we were off.  The new start area is a mostly gradual climb for about three quarters of a km to the top of Picnic Table Hill.  Lots of double poling, a little kick double pole, and a few strides.  There was one near crash ahead of me, but no one went down.

There was a good pack of about 15 forming and I was still in the back over the first couple of km which are generally descending.  As I said above, my skis were crazy fast so I was able to hang on pretty well.

Eventually a lead group of 8 formed and started to pull away.  There was about 3 guys left in no man’s land and then I had a small group going with Scott Ellertson, and a HS kid.  There were a few others either with us or just behind us for a while.  I know I looked back once to check and saw Kevin just a few meters back along with a few others.

As we hit the one major climb on the way out at about 5.5km our little trio made some separation.  I was working hard to hang on the climb but every time we went downhill I was riding up on the tails of Scott’s skis.

When we hit the turn around I was feeling pretty good having sat at the back of the group for most of the time and having the best skis of the group.  I was hoping to catch a quick drink, but no one stopped so I wasn’t going stop and get dropped.

I thought the kid with us was maybe slowing down a touch so I skied up next to Scott and asked if he wanted to work together.  He said he was ready and I promptly started slipping all over the place.  I started working really hard just to keep my technique good enough to keep some kick.  Scott took over somewhere in there and got just a tiny gap on me.  I spent most of the rest of the race losing a little ground to him on the climbs and then getting most of it back on the downhills.

Over the next 4 or 5 km we brought one or two other skiers back in.  Scott was closing in on Per while I was generally holding my ground about 5 to 10 seconds behind him.  At one point I was probably only 5 seconds behind Scott and about 10 behind Per.  And then Per found a little something more for the last few climbs and pulled away a bit again.

It wasn’t until the top of Picnic Table Hill that I glanced behind me again.  Crap!  There isn’t a huge gap to the chasers I needed to keep going.  And despite that, the HS kid I thought Scott and I dropped shortly after the turn around came flying by me with less than a kilometer to go.

The reworked trail did throw me for a bit of a loop.  The trail used to descend a bit after Picnic Table before having one more punchy 20-30 second climb before the descent back to OO and that last little kick to the finish.  I was saving just enough energy to punch up that climb and then use my fast skis to the finish.  Except that climb doesn’t exist anymore.  You roll flat over the top and then its a descent all the way back.  Nuts.  It might not have made a difference anyhow, but it wasn’t executed the way I had planned.

In the end it was a tight sequence of finishers with Per, Scott, HS kid, and finally me.

I thought I had a great race.  I was 13th overall and first in the 35-39 age group.  Even if they had been ten year age groups I would have been second.  That’s not too shabby in my book.

It was another race where I was with people and actually racing.  Scott Ellertson has historically been another step above me so to race within striking distance of him for a third race in a row is good.  Andy had a great race and was over two minutes ahead of me.

Probably the highlight of the objective analysis was beating Kevin Brochman for the first time ever.  Kevin was my high school ski coach.  He started coaching me in the fall of 1992 as a scrawny seventh grader who thought he was signing up for a recreational ski club.  He has coached many many great skiers who have gone on to significant skiing achievements.  For me, it took me 24 years to finally eek out a 12 second victory.

I’m less and less thrilled with my spreadsheet with each report.  Not that there isn’t some merit to it, but when the results it reports don’t quite match the eye test and subjective analysis I’m left not trusting the numbers.

In fact, I ran the numbers twice on it this time.  By default I have it set to only compare finishers from both races who finished within 50% of the winners time of both races.  We had a few outliers with that.  One had a great Birkie and one had a great Seeley.  The result was a massively skewed trendline and a pretty pedestrian suggested improvement.  If I bumped the cut-off down to 35% it tightened things up quite a bit. 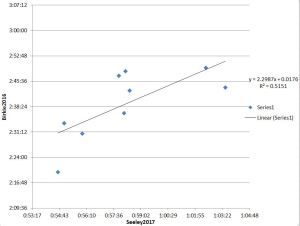 The “result” is the slowest of the year so far.  This one places me just outside of the top 200.  Eh, whatever.

Great question.  More training this week and then we shall see.  The weather is turning absolutely craptastic if you are a winter sports enthusiast.  If I race this coming weekend it will be the Boulder Lake race in Duluth on Sunday.  Flash registration opens on Monday.  I might just train through the weekend.  The following weekend I’m signed up with the Noque.  They are getting potentially even worse weather than we are and I’m highly concerned I’ve made a donation to a race that won’t happen.  I’d really like to do it though.

Otherwise… time is ticking down.