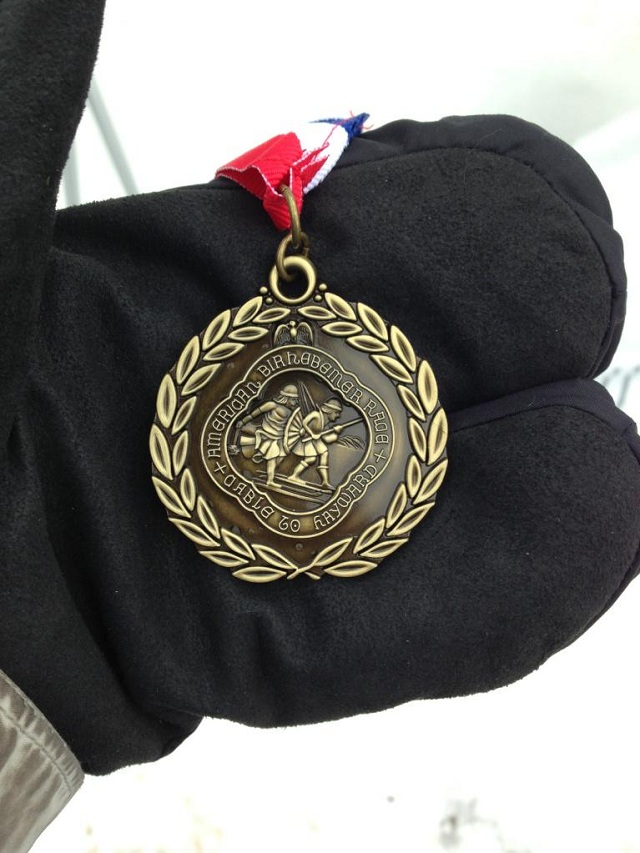 By Ben Mullin
Well this is the big one. The one that got me to train more consistently for the last 9 months than anything in the last 15 years. The one that had me feverish for a whole week before hand. Yes, the 40th annual, and my first, American Birkebeiner.
As I started writing this race report I realized it had the potential to get a little long. I may still be a little delirious in my recovery from Birkie Fever, so I will do what I can to rein in the length.
Speaking of Birkie Fever, I knew what it was before, but I sure caught a strong case this year. At first I thought the infection occurred when I registered on the first day it was open, but when you register the day it opens, it seems likely to have occurred much before that. I don’t know if the first year is worse than others, but I kind of liked it, so an annual reoccurrence might not be a bad idea.
The week before hand consisted of waxing, talking waxing, talking weather, rereading sections of Beyond Birkie Fever, double checking Ben’s “Skis, Boots, Poles” checklist, waxing, packing, checking the weather… By Friday I made a token appearance at work, had a carbo-loading lunch with a friend, and skipped town. 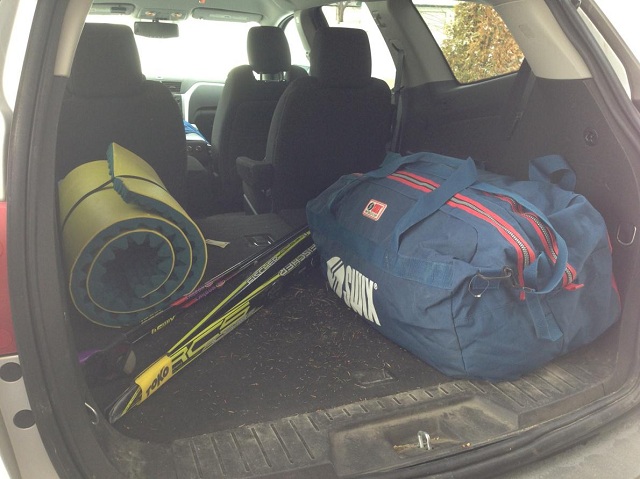 I was staying with Ben Jonjak and a few other CyclovaXCers at Ben’s mom’s house in Spooner. What a great place to stay. This was Marva’s 26th Birkie and Ben’s 11th and all of the history and experience in that house was a great prelude to the next day. A few of us met at the house and carpooled the rest of the way to Hayward for the Expo, packet pickup, and a final carbo loading spaghetti feed at a local church. When we returned it was time to set out all of the gear for the next day and debate wake-up call and departure times. The answer is 4:00 and 5:00 respectively.

Ready to roll
I opted to park at the Donnellan lot in Hayward while everyone else continued on to Como. I was on the very first bus out of Hayward a little before 6:00 and was at Telemark about 6:30. Plenty of time no matter what wave you are in.
The CyclovaXC corner in Telemark is a great place to hang out before heading down to the start line. There were upwards of 15 of us through there at various times. All of the first bumping, hand shaking, back slapping, trash talking, and good-lucking that goes along with such a good crowd was incredible. 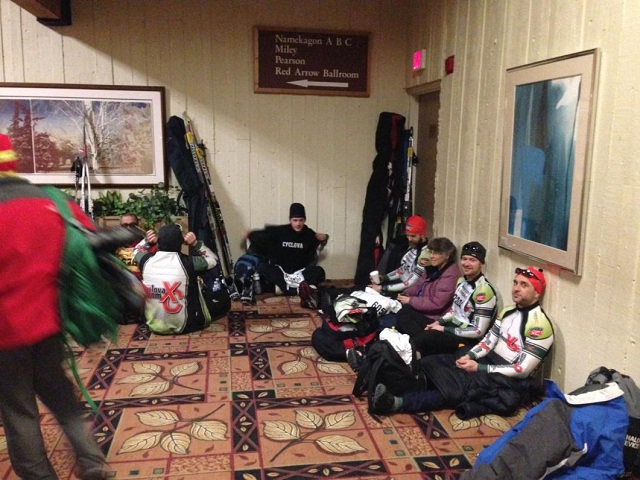 CyclovaXC Corner
On to the race. Being my first, and having my qualifying race cancelled due to rain, the best I could do was talk my way into the 7th wave. Crunching a bunch of numbers beforehand (hey, I’m an engineer, it’s what I do) I knew I was going to be doing a lot of passing if I skied up to my expectations. Not a single person told me it was going to be easy to pass people so I resolved myself to just rolling with what came out on the course for the day.
Dallas and I lined up on the front line of wave 7, the timer counted down, the gun went off and the banner went up and we were off. Once passed the double pole zone and the timing cable it was time to start skating, and immediately I could tell it was going to be a soft day. Just on the flats right out of the start the snow was several inches deep. Just rolling with what comes I just settled into an easy V2 along with a couple of other people as we lead wave 7 towards the power lines. 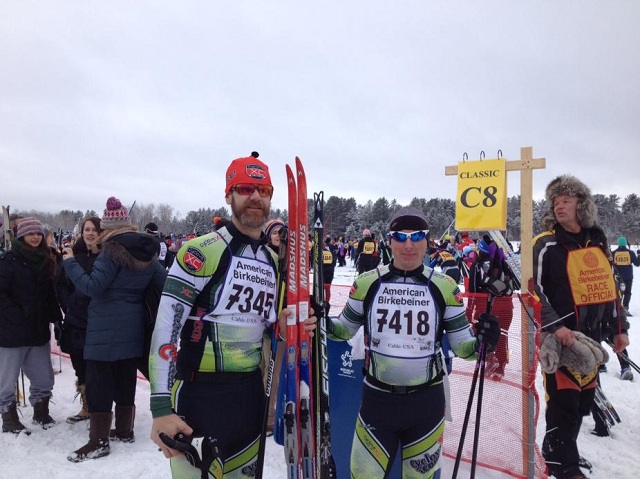 Ben and Dallas ready to rock wave 7
As we started up the power lines we were already starting to pass people from wave 6. There was plenty of room on the power lines to pass and it was just easy going at that point. Passing through the mass of humanity that was the first aid station was a foreshadowing for the next 30km. For that next 30km I didn’t have more than a stretch of probably 30 seconds at a time where I wasn’t weaving, waiting, or dodging. Somewhere around 7.5km I came to the top of the first descent of any magnitude and found a mass of probably 30 people completely blocking the trail waiting for people to snowplow down the hill one at a time. I politely made my way through the crowd and promptly bombed the hill. The same thing happened again at Snowmobiler’s Hill.
All the way through OO was a matter of relaxing at the end of the conga lines on the hills, doing micro intervals at the tops of the hills, and zipping past people on the downhill and maybe passing one or two at the bottom of the next or snowplowing to a complete stop before starting up again.
Past OO things started loosening up a little bit. There were still plenty of people to pass, but the conga lines were much shorter or were only single file instead of double file. I did feel like quite the rock star at that point of the race though still feeling good, flying past people, doing a little jump skating to get around some people on the uphills and getting the occasional cheers for wave 7 (I finished 2nd out of the wave).
Somewhere around Mosquito Brook Road the micro intervals started adding up and I could tell I was tiring. I never cramped up, but I could feel my triceps, quads, and stomach bordering on full cramp mode. Bitch Hill isn’t so bad. The look of it sure invites terror though. After that point I honestly don’t remember much of the rest of the race. I wasn’t in death march V1 mode across the lake, still managing a slow V2. Some wave 8 person came past me and I hung on for a few hundred meters before letting them go. There was some people yelling and some cowbells on Main Street, and then I was done.
I collected my finisher’s medal, changed, had some soup, talked to some people, cheered, talked a little more, and then headed back to Spooner for some pizza and beer celebration.

Post race pizza and beer celebration
Some more number crunching post race (hey, engineer remember) a few things stand out. First, I passed approximately 1300 Birkie skaters during the race. This does not count Korte skiers or Birkie classic skiers of which there were quite a few of the latter for sure. That is one person every 39 meters. That is a lot of people. Second, if they keep the same percent back for wave seeding next year, I missed qualifying for wave 2 by 45 seconds. I feel like I skied the best race I could, but to miss wave 2 by 45 seconds with all of that traffic is a little disappointing.
That small disappointment aside, what a great apex to the ski season. I’m still going to ski as long as I can, but the excitement is going to tail off as the weather warms up. A huge thank you to Ben and Frank for creating CyclovaXC. I have met so many awesome people that have become training partners and friends over the last year. So much for keeping this short…